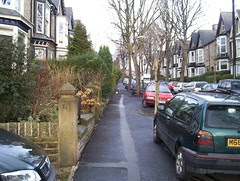 my house
Originally uploaded by edsghm.
Posted by Guy Merchant at 5:59 AM

This house looks oddly like my house.
Strangely, I live in North London.
The archiectural style is very similar however.
Were builders similar in the mid 1850s?
I think we should be told.
This is a terrific blog and just as good as my friend Julias.

Thank you for your kind words. These houses are built in the 1890s, modelled apparently on those in Boston US where the cutler who commissioned the building had once visited. Martin and Gabriella (opposite) have got original builder's graffiti in their cellar. One day I may blog a photo of that! Whole areas of Sheffield were built at that time - a period of enormous industrial expansion. The whole place must have been one enormous building site. There are some strange modifications to the historic pattern. Stray bombs targeted at the steel works cut a line across Nether Edge. Buildings were eventually replaced, and most are in keeping with the original architectural style. I doubt, though, that they have the grand marble or black slate fireplaces of the older houses.