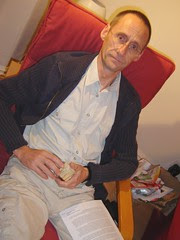 I drove home through Hunters Bar and Sharrow this evening. Hunters Bar is particularly attractive at this time of year - all narrow streets, small shops and twinkling winter lights. I came out just across from the tanning shop called "Fake it" and that set in motion a whole train of thoughts around contemporary notions of faking.

I think we have quite ambivalent attitudes to faking. Getting fake designer clothes when we're on holiday quite appeals, but fake laughter and fake money are beyond the pale. Fake fur? Maybe. But fake jewellery just isn't real jewellery. But worst of all is being a fake. That's a real put down.

Lifestyle changes, home and garden makeovers, house swaps on TV seem real enough and no-one seems to care too much about faking on reality TV or celebrity chat shows. This suggsets that we make strategic choices about what's 'real' and what's fake according to how we value it, ignoring, as we do, the fact that fake is just another kind of real. Fake fur is a good example: either it's not real (ie cheap or simply a synthetic imitation) or else it's better than real (depending on your value systems); whichever, it's still real enough to wear.

So, I click down my blogroll and read the people who's authenticity I value. Here's drJoolz writing about authenticity - same theme, different take (and BTW I wasn't politely bored!) - very important stuff, because the fake/authentic binary cuts right across identity performance and those ongoing narratives of the self. Well, my blog voice may be different from my other voice(s), but it expresses me...and the performance over on Blogtrax reflects on that performance - it couldn't really be made up (could it?), couldn't be fake auto-ethnography. Well it could but it isn't.

I love this post - and you know what - the past few posts are slightly different in style and voice than your "usual" - they seem more personal and more discursive / reflective - or is it me reading YOU into it more because now I have met you and can fill in the gaps better?

Yes I love this too and I agree your voice is more narrativised. (Is that a word?)
And that notion of 'fake' is very interesting; I overlooked it completely in my thinking and it is key to doistinguish between types of fakery as you say.
I love the photo. It makes me want to bring you a cup of tea.