From glocalization to networked individualism 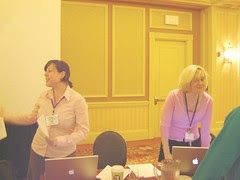 Here’s Sarah and Danah right after their NRC presentations. They raised so many interesting questions about identity and social networks. And then, almost by happenstance, in another network at the weekend, I got talking to Christina about online/offline networks and environmental activism and she suggested I checked out Barry Wellman’s stuff. Well, there’s enough of it!

Wellman traces the evolution of networks from neighbourhood groups, through to the glocalized networks he wrote about in the 1990s and suggests we are now in the era of networked individualism where connections are between individuals regardless of place/address ("messages come to people not the other way around" ).

There’s loads on Wellman’s website – this is from “Connected Lives”, 2005:

“…individualized networks are often larger than glocalized networks and are less densely knit. Networked individuals know people through individual networking, such as ad hoc meetings over lunch or sending individually tailored email. Their ties are specialized, providing them with different types of support and sociability in a variety of social milieus. Each milieu has limited control over an individual’s behaviour; each individual has limited commitment to a specific milieu and a low sense of group membership.” (p.5)

That all seems to ring true, but I’m still only half way through!

On a completely different strand, Huw Thomas UKLAs new press officer recommends 3 children’s books that explore themes that associated with play in virtual worlds: Inkheart by Cornelia Funke; Amadans by Malachy Doyle and Beyond the Deepwoods by Stewart and Riddell. (Thanks to Huw - he’s probably on commission!)

Gosh. So interestingthis work. Has he beaten us to the answer Guy??

Crikey, no DrJ! OK, so he's good on networks, but where-oh-where is the identity performance? (C minus, could do better)

One of the students in my pilot study reminded of how central these sorts of networks have become to her life. During a focus group interview, I'd given a quote from Educating the NetGen that sort of crystallized what the authors think that means, and I so asked these students if they felt the quote reflected them accurately. So this student said, Net could stand for Internet of course, but it could also stand for Network, as in social networking. I thought that was rather clever. (These students are often much cleverer than I, in fact.)