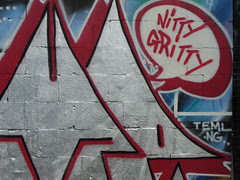 On a graffiti theme again, here’s another one from Sharrow. The Mailer quotation below I borrowed from Alex Wright’s blog, mostly because my blogging inspiration at the moment is quite low.

"... chilled on one side by the bleakness of modern design, and brain-cooked on the other by comic strips and TV ads with zooming letters, even brain-cooked by politicians whose ego is a virtue - I am here to help my nation - brained by the big beautiful numbers on the yard markers on football fields, by the whip of the capital letters in the names of products, and gut-picked by the sound of rock and roll screaming up into the voodoo of the firmament with the shriek of the performer’s insides coiling like neon letters in the blue satanic light, yes, all the excrescence of the highways and the fluorescent wonderlands of every Las Vegas sign frying through the Iowa and New Jersey night, all the stomach-tightening nitty-gritty of trying to learn how to spell was in the writing, every assult on the psyche as the trains came slamming in. "

I’m interested again in Pirandello, who’s work revolves around the problem of identity. The self exists to him only in relation to others. You can imagine that I was fascinated to see that I can get Cosí é (se vi pare) [Right You Are (If You Think You Are)] for 1p on Amazon. That’s either ridiculously cheap or else it’s not worth having.

friendster yuk! You mean I replied to automated message: how sad is that! Has Amazon turned into an auction? Now the 1p copy has gone, is attention driving upthe price?

Got it! Ony 1p, that's why there's only the more expensive 10p copies left!!