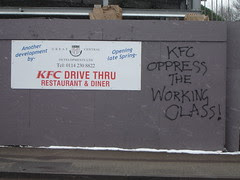 It would be useful to start thinking of wall-markings in new ways. I'm getting a little tired of tagging my photos 'graffiti' - the term seems to have outlived its usefulness. For a start wall-marking isn't simply restricted to writing, other modes are involved...and then again, the distinction between legitimate corporate marking and other kinds of meaning-making is not particularly clear-cut or subtle.

Here, the anti-KFC marking is a sign of resistance - open to interpretation, of course, because it's not immediately apparent just how KFC oppresses the working class.... However, it can only be properly read in relationship to the sign next to it, which we recognise immediately as being 'official' in some way. And then, the context is important, too. The immediate context, I guess, relates to the material surface: the temporary plyboard boundary and all that it suggests as well as the writing tools and processes implicated by the particular appearance of the texts. The wider context is the plot development and then the whole commercial structure that is KFC, the discourses of multi-national commerce and anti-globalism etc. etc. So, I don't think it's particularly helpful to reduce all this and label it 'graffiti'. New term, needed (marks of resistance?).

MMM. Looked for some terms and only came up with this:
http://www.graffiti.org/faq/graffiti.glossary.html

guerilla art's cool - actually I like marks of resistance, clever in a sort of pseudo-political way...