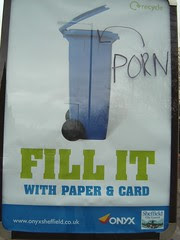 This urban graffiti makes social comment on a poster which has a different social message…and unlike the one I showed here, doesn’t refer to anything in its immediate environment. The reference is far more abstract than that and is tinged with humour. But it isn’t simply humorous like the ‘Wall, what is it good for…’ message here. Iain Sinclair writes richly about graffiti and ephemeral urban texts here, whereas this report just shows how widespread wall slogans are in different political contexts. I love the sentence “It is mandatory for parties to get the building owners' consent before painting graffiti or messages on walls” which works so well when de-contextualised. Incidentally the local council have now removed the offensive ‘porn’ word which corrupted their message or spoiled the look of their street furniture – one of the two - either way we're under surveillance and 'they' are policing 'our' writing.