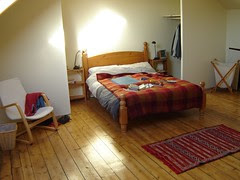 New bedroom
Today is my blog’s 3rd anniversary. I’m not celebrating as such, but it was good to see this, which suggests that my celebrity status is growing (I hope my royalties grow accordingly):

We went to see ‘Stranger than Fiction’ last night. Well it’s OK - like an attempt to make a film out of a post-modern novel – which doesn’t quite work I was reminded of the Paul Auster story where his character gets incarcerated in an underground chamber with no means of escape. There were also some echoes of ‘Groundhog Day’ – and I wondered whether there’s a need to retell the story of the post-modern American subject in search of agency and ethical sensibility.

Happy Birthversary! We missed you at NRC, people did remark on your absence. However, you did not miss out on Vital Issues turned into karaoke/American Idol/Jeopardy... yikes, is all I can say.

Thank you, Sarah. It was a shame to miss NRC this year - I hope it went well for you. I tried to leave encouraging comments on your blog, but it wouldn't let me post. maybe it thinks I'm a spammer.