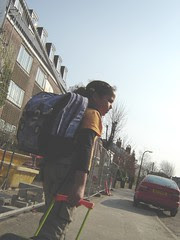 baggage
In this article I wrote about some of the popular manifestations of moral panic that surround online interaction. I suggested that the internet is often depicted as a hostile and volatile frontier, an insecure environment in which anything online can be stolen or corrupted by infectious viruses - a place where identity theft is rife and deception always around the corner, where you are constantly under surveillance or at risk from sexual predators. At that point I left narcissism and addiction out of the equation, but these must now take their place alongside cyber-bullying. Cyber-bullying is described by Noret and Rivers as ‘indirect’, a bit like gossip. Now ‘teachers and parents need to realise that a child’s mobile phone or computer isn’t just a communication tool – it’s also a way for a bully to reach children in their own homes.’ That’s quite a dramatic press-release. OK, 15% of the 11,227 children had received a nasty and aggressive text message or email, but come on, name me one communication tool that can’t be used for such purposes. Of course bullying of whatever sort should be discouraged, but on the other hand do we imagine that all communication whatever the medium is going to be ‘nice’ and harmonious and carefully policed by caring adults – and that we’d even know, most of the time. On a completely different note, here’s Ruth – in the studio again!
Posted by Guy Merchant at 11:58 AM