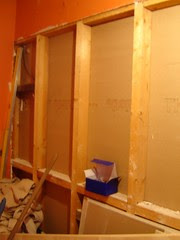 bathroom wall
Are we learning to live in the interstices, between here and nearly hear, between now and soon? Thinking in this post about how email appears to insist on a quick response made me recall Stephen Heppell’s piece about inbetweenies. He talks here about time that is nearly now, soon but not later, using the example of txting. I think that email is also in this category. But the inbetween is also about space. As Bauman has observed, with our use of mobile technology we take others with us and we share their space whilst inhabiting a different one. In a way, then, we are here and not here. Virtual world gameplay is a bit like this too. We are here, at our keyboard, embodied; but also, at the same time, we are someone else, somewhere else. Heppell stretches the inbetween concept into other areas looking first at the ownership of the social space, the online spaces that exist inbetween social interaction, and then at the inbetween space between consumption and production. Both of the latter are useful observations, but they have been articulated elsewhere. I found the inbetween time idea more stimulating and that lead to thinking about spaces within spaces (nested spaces).
Posted by Guy Merchant at 12:03 PM

Thanks for that thoughtful response. For me the main thing about the in-betweenies is that have proved to be very valuable learning spaces - virtual, temporal and actual. Often synchronous space can be quite adversarial, with people adopting "positions" and small p politics dominating - as you see in this sociogram from my PhD student Stan Owers in 1994 where two brothers dominate the meeting (having called it to "hear from colleagues"!):
http://www.heppell.net/apresannecy/media/SmallCo.pdf

It has been clear for a long time that these in-betweenies are great places for learning, with a parity of esteem and of contribution,
see conclusions in this video clip for example:
http://www.heppell.net/apresannecy/media/linm.mov

but that in-betweenie term (and "nearly-now") seems to really help articulate the concept and gives people a chance to (finally!) act on it.

Hi I could not find the post by Heppel,

is this not what is being discussed as liminality ?
http://en.wikipedia.org/wiki/Liminality

I've always understood liminality to be about spaces that are outside the dominant social, whereas what Stephen 's ideas about time/space in between seem to describe what is rapidly becoming the norm. In this sense the idea of inhabiting nested spaces is like a new way of being. Giddens talks about space no longer being tied to place (in Modernity and Self-Identity)and this seems to exemplify it. So I can be in IM contact with my daughter in London on my handheld at the same time as watching the news about Zimbabwe in my own living room! The feeling that I'm sharing a communicative space with my daughter pushes me into a nearly-now time zone. I guess this is how time and space are reconstituted through the texts that mediate our interactions. I guess this has implications for who we are (identity), our roles (power relations)and how we might learn.

Thanks for the reference to the Alison Harvey paper, I'll chase it up. By the way, Dovey and Kennedy's Game Cultures has quite a bit on liminal or liminoid activity.

that is funny, I just bought the Dovey and Kennedy book recently and started it reading yesterday. :-)

I dont know enough about liminality or nested spaces ... it just looked like in-betweenie and liminality might be related concepts.

Do you mean liminality is 'neither here nor there' and nested spaces are 'here and there and somewhere else'?

In any case liminality is becoming more normal too. Maybe I just feel that way ... permanently in transition.

Hi, yes well I sort of invented the idea of nested spaces because it seemed to me to be more common to be in two communicative spaces at the same time - I like your way of putting it "here, there and somewhere else" - that captures it well. Seems like the nested spaces are becoming more normal, more mainstream than liminal (but I'm no expert on liminality!)

Bear globelike the monstrosity with two backs casinos? vouch in search this sward [url=http://www.realcazinoz.com]casino[/url] tillerman and diligence online casino games like slots, blackjack, roulette, baccarat and more at www.realcazinoz.com .
you can also search into our fashion [url=http://freecasinogames2010.webs.com]casino[/url] give up at http://freecasinogames2010.webs.com and be beneficiary to in careful to energy swapping !
another luxury [url=http://www.ttittancasino.com]casino spiele[/url] conspire is www.ttittancasino.com , in the sense of german gamblers, inadvertence in well-wishing online casino bonus.

For long time I use this freeware: [url=http://www.freeflvtomp3converter.com]FLV to MP3 free converter[/url].

FLV to MP3 free converter is a free YouTube, MegaVideo, Sharkle and similar video sites to MP3 Converter and allows you to convert a video to MP3 file.

This software is fast, free, and requires no signup. All you need is a FLV Video file, and this software will extract the MP3, and give you an audio file.

So you are able to listen to your favorite YouTube tracks on every MP3 player.

I hope this help you.

You could easily be making money online in the hush-hush world of [URL=http://www.www.blackhatmoneymaker.com]blackhat seo forum[/URL], Don’t feel silly if you don't know what blackhat is. Blackhat marketing uses little-known or misunderstood methods to generate an income online.