Nobody texts any more 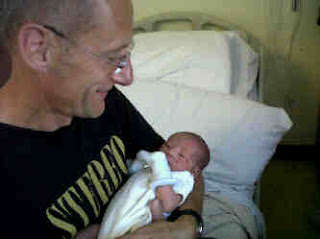 A few years ago the cool hunters of adolescent literacies were reporting that young people thought that email was dead. You might send an email to your parents or your tutors but that was about it. Young people in the UK began the massive communication migration to texting a while back. In fact many reports suggested that texting was bigger here than elsewhere (maybe the cost factor?). But what next? My daughters are no longer teenagers, but I was still interested to hear Ruth say 'Nobody texts anymore, there'll all on messenger!' It was new but not new, if you see what I mean. True though, to the extent that regular bulletins on the lead-in to the birth of my grandson, Dylan (pictured above) all came through Blackberry Messenger, as did the photograph itself. Born into a world of mobile messaging and phonecam images. New born babies are surrounded by our devices and their arrival in this world is recorded and distributed in new ways.
Posted by Guy Merchant at 11:41 AM