Belated congratulations to Dr Tamara Jones whose thesis looked at power and the patterning of spoken interaction in a reality TV show!! Bouncing from that to a bit of online teaching using Adobe Connect made me acutely aware that online interaction (can we still call it CMC?) is not the real world. And even though it's generally pretty smooth and quite immersive, it's virtual after all. Tamara's work reminded me how the old-school world of Conversational Analysis in which speakers were supposed to take polite turns, stay on topic and repair any hitches or perturbations is now about as idealistic as attempts to apply written grammar to speech. In other words most everyday conversations are littered with overlaps, as well as being punctuated by attempts to take the floor or change the topic. On the other hand conversational interaction in Connect cannot proceed in that way, because it's stripped down, with only the video feed of a talking head for a listener cue. Our best solution is to do turn-taking, and of course the environment encourages that in its design (mikes on or off, and onscreen icons to flag one's intention to speak). I think the upshot is that the conversational flow is different, turns are longer, collaborative meaning making as well its opposite, disputation, is harder to achieve. It's my sense that individuals talk for longer periods of time than they do in most face-to-face encounters and that they may be more measured in what they say. Certainly it's another of those instances of virtuality in which it seems deceptivley like RL, particularly as the technology gets better and the connection less vulnerable to glitches; deceptively like RL, but nothing like it!
Guy Merchant at 9:39 AM No comments:
Share 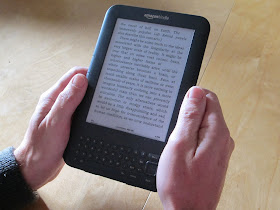 Last night I bought 'You are not a Gadget'. It was one of the simplest bits of shopping I've ever done. First of all I was just curious to see if they had it in the Kindle bookstore. Less than 20 seconds later I saw that they had, and by exerting some gentle pressure with my thumb on the choose button my bank account was lighter by just over £10:00 and I was reading Jaron Lanier's book, still not quite sure whether I really wanted to or not. You could say I was curious. It has a lite style but a strong message, and one that fits the idea of technological determinism like a kid glove. But it made me think about how easily Amazon had relieved me of £10.00. Now I like the Kindle. I like the easy reading that it enables, and I don't have a problem with easy shopping. But the thing is that these things are seemlessly bundled together and I suppose that's where markets and meaning meet. And when all is said and done, I am what I consume.
Guy Merchant at 3:03 AM No comments:
Share

I've got multiple threads going at the moment and I'm beginning to wonder if they'll coalesce into a single theme. So I'm half way through writing a theoretical piece on the relationship between SNSs and wider social networks and really enjoying some of the reading I've been doing, and at the same time I've been hot on the trail of pinning down my ideas on critical media literacies. So here's a big shoutout to Colin and Michele for pointing me to the book Digital Content Creation (in their series). In particular, the debate set up between David Buckingham's cautious offering and John Hartley's digital optimism is really interesting. More on this when I've got the time, but for now this is just a strong recommendation!
Guy Merchant at 6:15 AM No comments:
Share

At first sight the film version of Mark Zuckerberg is an unlikely hero. Depicted as emotionally-driven, at times bewildered and at times bewildering, he appears to have a strong sense of vision. Exactly what that vision is, is only ever hinted at. Facebook should connect people; Facebook should be free; and at all costs it should remain 'cool' - whatever that means. Zuckerberg's narrative actually turns on a familiar trope. Individualism operating outside of social structures in the business of carving out new terrain. It's the Wild West, it's the American Dream. You just have to replace rugged individualism with geeky individualism. That's not to say it's not a good film, and a great story. I left the cinema wondering whether and how Facebook is cool. It's as cool as warm beer in Britain. Not particularly cool but nearly everybody seems to drink it! Here' another review.
Guy Merchant at 5:28 AM No comments:
Share 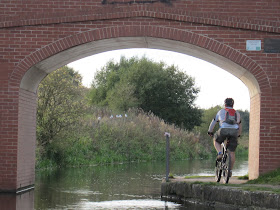 For a long time I've been thinking (and sometimes arguing with Richard) about meaning and material objects. In the highly entertaining book 'What Goood Are The Arts', John Carey describes this great thought experiment in which an established artist paints a tie with blue paint, and completely by chance and more or less at the same time, a child performs the same act, perhaps for very different reasons. Is the first one, because it is self-conciously part of the work of the artist, any different to the child's version? Carey succinctly expresses the point of view I have been taking. 'Meanings are not inherent in objects. They are supplied by those who interpret them.' (2005:20). Enter Bruno Latour as the door swings closed behind him (or was that Jim Johnson?).
Guy Merchant at 2:31 AM No comments:
Share 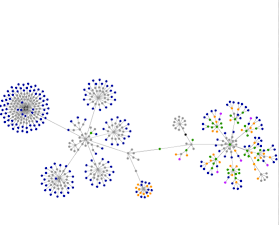 Well yes I do. But these are principles that guide my interest in literacy. I feel a list coming on. Here goes: 1. What children and young people produce/consume or read/write is an important starting point for those who work with, care for and educate them. 2. An important function of education has always been (and continues to be) concerned with encouraging learners to read and write (produce/consume) the 'right sort' of things in the 'right sort' of ways. 3. Whether as moral correction, or for intellectual development or to prepare them as future (present?) citizens literacies matter. 4. Children and young people engage in a whole range of literacy practices that are not always recognised by adults and by the education system and often meet with their disapproval. 5. The boundary between informal/formal and vernacular/official literacies is becoming increasingly blurred, particularly as we recognise its permeability and the importance of building upon what learners already know and do. 6. Meaning-making in digital environments is at the frontier of these new configurations. Mmm...are they principles?
Guy Merchant at 4:07 AM 1 comment:
Share

We have a really great Special Issue of JECL just out which brings readers the cutting edge research on literacy and technology in the early years. It's co-edited by Victoria Carrington, Vivian Vasquez and myself. You can see the contents here. It's got a great international feel to it and it was very rewarding working with colleagues on this edition. Of course, as always, the finished product is just the tip of the iceberg so thanks to all involved in the process from the contributors to the reviewers, to the admin support and to the publishers. Happy reading!
Guy Merchant at 7:11 AM No comments:
Share 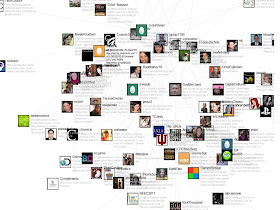 I've just started writing a piece on social networking. The provisional title is 'Unravelling the social network' and I reserve the right to use that! Having a title I like helps me get started even if I drop it later on. Visualizing social networks needs to have some sort of focus so I had a look around at what's out there. There are reasonable free tools for visualizing web sites (not quite the same thing) and some work on Flickr. But the Neuroproductions Twitter Friends visualizer wins the day for me. I'll probably use it as an illustration. I suppose all it does really is to feed off your Twitter stream and the Twitter streams of your friends, and the downside is that it doesn't show linkages. But it's playful and attractive and works well and hey that's me right in the middle!
Guy Merchant at 11:08 AM No comments:
Share
‹
›
Home
View web version