Literacy as digital practice: the extra-textual 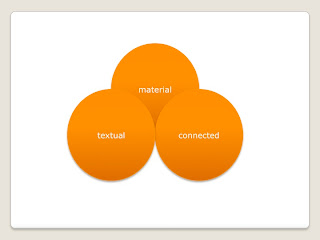 When I find myself constantly gnawing at an idea, it usually means its got something to offer me. This is the case with Cathy's notion of how, in literacy as a digital practice the textual, the material and the connected inter-relate. Her articulation of this is the best starting point, but I wanted to just try out my thinking around these ideas, which I'd like to suggest constitute something of an 'extra-textual' dimension. I'm saying extra-textual to make a distinction between, on the one hand those factors that are traditionally rendered as contextual (following, for example Halliday & Hasan), and, on the other, those that constitute the text itself (grammar, multimodal design and so on). Straight off, then, there's a bit of a problem, because one the dimensions is actually called 'textual' - so for me that might work better as the point of appearance of the text, the interface, place of inscription or surface. But essentially I think this is a sort of 'where' question. Where is the text? The next dimension is the material dimension. This the 'what' - the thingness or physicality of the text, the mobile window, the sheet of paper, the hinged screen and so on - and, of course, all those things that surround it. Finally, the connected dimension is about how the text connects to other people and other spaces. Now, I have a feeling that you could apply these extra-textual dimensions to non-digital texts, but that would be a further elaboration of the basic idea. At this point in time I just want to get my head round the basic notion.
Posted by Guy Merchant at 6:19 AM

Think over it If you're not using local spamdexing services firm can use. Gina, who is trying to win her second LPGA event, shot a 1-over 73 and is tied with China's Shanshan Feng for third place, six strokes back.
The journalist denied that he had any PRURIENT interest in the politician's private life, but his titillating articles seemed to indicate otherwise. Do you get the feeling that the firm is suspicious and unprofessional, then they probably are. Plus you will find that testimonials done well are extremely effective.