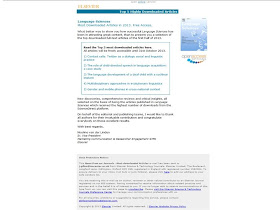 In retrospect I think Julia Gillen and I managed to capture something of the essence of microblogging in studying how Twitter was used in what you might now call 'the early days'. But it was still great to see that the paper 'Contact Calls: Twitter as dialogic social and linguistic practice' was the top downloaded article in Language Sciences, and as a special deal it's now available free till 31st October! The paper has a natural partner with one I wrote with Julia Davies on blogging. Both are insider accounts of how we as academics have taken up social media and used it for our own purposes. Trying to describe the approach we used is quite hard - insider account is probably the best, but we've also tried 'dual autoethnography' to try to capture the idea of a parallel and reflexive endeavour. Neither study really has the depth and nuance of autoethnography, but the idea of a two-handed approach in looking at adoption/ early adoption has its advantages. See what you think!
Guy Merchant at 1:11 AM No comments:
Share

Your books are reading you 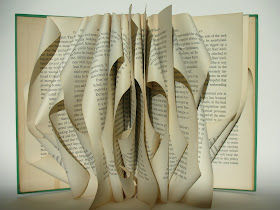 The flurry of concern over data harvesting has taken up quite a few column inches lately. It seemed that no-one was particularly concerned when Amazon first started recommending books to you, or when it was revealed that Tesco collected smart data on local shopping trends, but now a more general paranoia has set in. This is mass surveillance and where will it all lead, say some; what about personal freedom they ask. Now there's renewed concern that your books are reading you (see here, for example). Electronic devices know where you are, what you bought, what page you're on and so on. Do I care? Not really, to be honest. I don't think I've ever once bought what Amazon recommended - it's clever, but not that clever. After all smart databases are only as good as the people that design them, and I challenge anyone to design one that fits my fickle taste. And if they could design one, I myself would be the first to be interested. The police only seem threatening when you're involved in some wrong doing, and by the same token surveillance only becomes problematic if you've got something to hide. But the root problem lies in those definitions 'wrong doing' and 'something to hide'. If you live in a democratic and genuinely open society those things are relatively unproblematic, reflecting principles like freedom of speech, freedom of movement (and in a market-led economy - freedom to consume), but as soon as that changes, data harvesting turns into surveillance. That's the time to start getting worried.
Guy Merchant at 4:36 AM No comments:
Share
‹
›
Home
View web version