What did you get in London? 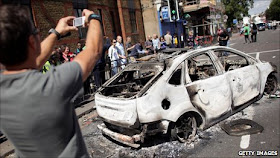 Whatever our opinion about the motivation of rioters, it needs to be acknowledged that mass unrest is a kind of spectacle and a political statement - even though it might not be a product of an articulated political doctrine. But as spectacle a riot is now densely mediated. It makes compulsive TV viewing, particularly when you are familiar with the location. Watching one sequence I was aware of watching 'from' the Sky News helicopter as 3 citizen 'journalists' photographed 1 rioter in a hand-to-hand scuffle with a policeman in Lewisham. Hidden from my view more images were probably collected from the nearby police helicopter and from behind their lines. After the event, if it is anything like the student unrest earlier this year, it will become a battle of images. But technology was to the fore in at least two other ways. Firstly, as has been widely reported, social networking sites and Blackberry Messenger (BBM) were used both to distract police attention and to co-ordinate activity and looting. Rheingold may have been ahead of his time with Smart Mobs, but this is mobile mahem writ large on the streets of London - so much so, that the police, roundly outflanked by youth are reportedly looking at (hacking?) BBM chatlogs. Secondly, the main targets appeared to be mobile phone shops and Curry's Digital. Gadgets have become objects of desire, significant cultural capital and a potent symbol for all. We do not need to speculate prematurely about whether this is a restless underclass seizing what has been denied to them, or a lawless mob stealing what can easily be sold (maybe both are true at the same time) in order to see the significance of the main retail targets.