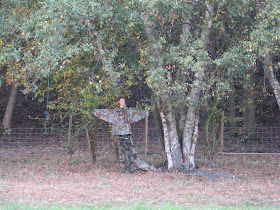 I'm back on Verbeek now, and quite appreciating the critique he makes of Latour. There's no doubt that he knows his way around the old actor network stuff, and there's a good survey of the ideas. I like the basic quote he pulls out from Latour: 'You could as well imagine a battle with the naked bodies of the soldiers on the one side and a heap of armors and weapons on the other' (1997:77). And he uses this to summarise why it is so problematic to separate humans from technology. This is the point on which Ihde builds when he says: 'Were technologies merely objects totally divorced from human praxis, they would be so much 'junk' lying about. Once taken into praxis one can speak not of technologies 'in themselves', but as the active realtional pair, human-technology.' (Ihde, 1993:34). This line of argument allows Verbeek to shift our attention to the ways in which humans and their devices shape each other. Good stuff.
Guy Merchant at 3:45 AM
Share