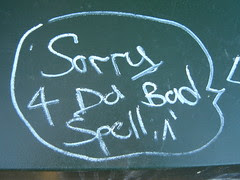 spellin
Too much technology in the classroom? This is a rather feeble article that sets out to take a balanced view of Interactive Whiteboards, but doesn’t really get anywhere at all. I suppose the idea that schools somehow have to compete with ‘iPods, Playstations and home computers’ is a bit naff anyway. Asking which technology and for what purposes would be more interesting. IWBs themselves are pretty neutral, but they do tend to lend themselves to face-the-front teacher demonstration/domination rather too easily. Meanwhile the BBC continues to try hard – clearly worried about the fragmentation of their market, they now plan to use YouTube as a ‘gateway’ to younger audiences. Doesn’t that miss the point a bit? Only time will tell how successful exploiting new media to draw people back to old media will be. Note the similarity in both moves as attempts to re-establish the traditional authority structures of a disciplinary society by using the very technology that seems so threatening.
Posted by Guy Merchant at 12:10 PM