Half full and half empty 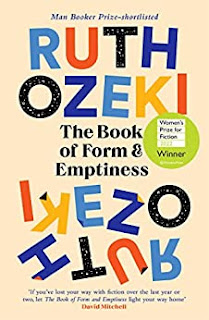 In one way or another a work of fiction is always subject to the gravitational pull of the time in which it is made. Whether we're thinking of its material form as Ozeki does, or whether we're thinking of its subject matter, shape and substance are important. A print book has a particular heft and the 550 pages of The Book of Form and Emptiness lend it a certain weight. The extent to which that weight is simply ballast could be what distinguishes good writing from the rest. The Book of Form and Emptiness faces a challenge common to much contemporary fiction that directly addresses the current milieu. To put it simply, issues like environmental catastrophe, the inequities forced on us by global capitalism and the rise of national populism do not readily present us with opportunities for resolution or narrative closure. The predominant cultural story, if it's not straightforward disaster porn, is one of unsustainability and collapse rather than one of noble decline or a utopian back-to-nature simple life. Ozeki piles on the tragedies, both personal and social. I'd not encountered the term 'psychic diversity' before, but it takes its place alongside disability, mental health issues, substance abuse and poverty. If loss and grief act as a pivot for the book, hoarding, self-harm and even gender fluidity also play a part. Nearly all the principle characters are in some way lost, confused or misguided. Exceptions are the author of the fictional book-within-a-book 'Tidy Magic', Cory the children's librarian, and the unnamed woman in the library who is always typing away on her laptop - perhaps typing the book itself. Reading all this was a lot to digest, particularly since it included the post-modern device of having the book itself addressing the characters and the reader and even reflecting on the nature of books themselves. Served up with a side dish of new materialism, there was a lot here on the agency of objects, enchantment, vibrant matter and so on - as if Ozeki had taken a crash course with Jane Bennett. As a result I could have done without the potted biography of Walter Benjamin and quotations from his essays - and the Borges garnish that was liberally applied.

The Zen that the author claims suffuses the book is hard to see amongst all this clutter. Its most overt appearance is in the figure of Aikon, the Marie Kondo like author of Tidy Magic who dispenses advice on how to fold your t-shirts and underwear. At times I longed for an Aikon editor who might clear a path for the characters and events that were building some momentum. But perhaps that's unfair. The prophetic old Zen master may be a stereotype, but he is important in his own way. And Benny's koan is the question 'What is real?' which forms an interesting counterpoint to the critique of consumerism that flavours the book. They come close to being brought together when Ozeki asks 'What gives things the power to enchant and is there a limit to the desire for more?'. To combine these thoughts with the idea that things, both made and unmade, have agency sets an almost impossible question...and if a book, too, is agentive what then? And how do you square a critique of consumerism with Benjamin's obsession with collecting books? Perhaps these are just meant as a collection of ideas to think about. All told, books and libraries have a central place in this fictional world, but there are unresolved tensions even here. Early on Ozeki observes that within this 'social hierarchy of matter, we books lived on top'. But the past tense is telling. Benji's mother, Annabelle, is laid off as media goes digital, and towards the end something similar is happening with the thinning out of library shelves. There's some print nostalgia at work here, but Ozeki is up front about this. In the end perhaps, The Book of Form and Emptiness is a timely reflection on the ways in which books shape our lives in different ways.

Posted by Guy Merchant at 3:04 AM No comments: