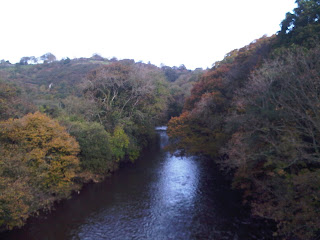 I was very pleased to be asked to contribute to the University of Exeter Graduate School of Education seminar series, yesterday. This gave me an opportunity to develop my thinking about virtual world literacies in classrooms, good because I’m currently putting the final touches to a journal article on this topic. I’m also making final changes to the Web 2.0 and participation paper, which should see the light of day, soon. That leaves a book chapter on social networking and primary schools and that’ll be me done for this year. Early next year I have a chapter-length entry for The Encyclopedia of Applied Linguistics. After that it will be time to knuckle down and do a more thorough analysis of the teen social networking data. Then I suppose we must turn our attention to publishing the outcomes of the ESRC Seminar Series!
Posted by Guy Merchant at 12:59 PM No comments: 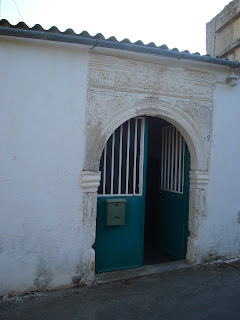 The other day I tweeted this quote, which captures an idea which has become very popular. But does written representation actually enjoy that privilege? In many ways literacy is a rather limiting description, all too often associated with schooled practices, skills and drills, and quite basic competences. Yet for many of us the idea of events and practices frees us from that trap. Heath was instrumental in showing that a strict distinction between the oral and the literate doesn't really capture our relationship to texts. Understanding the social is 'integral to participants' interactions and interpretive processes' (1982:50). In other words meaning-making doesn't happen in isolation. So any text could work in that way, whether in writing or any other modality. The only privileges that writing enjoys are those that are directly related to power structures in the job market, in business and the legal system (to name but a few). We need to give learners access to those privileges, whilst building a curriculum that takes an informed view of everday communication.
Posted by Guy Merchant at 12:18 PM No comments: 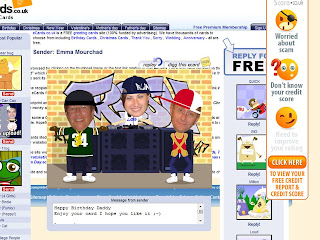 Victor Keegan writes in today’s Guardian about the 3-D web and the rush to create virtual cities. It’s techno-utopian stuff but he draws attention to the narrowing gap between social networking and virtual worlds. Interesting stuff, but when most people you meet turn their nose up at the idea of virtual worlds, you begin to wonder who signs up to all those accounts. But I’m also interested in the whole notion of what’s virtual and how it’s immediately associated with heavily technologically mediated experience and a Snowcrash-like alternate reality. So reading Nicholas Burbules (here) is food for thought.
Posted by Guy Merchant at 2:29 PM No comments:

It's easy to make a quick animated show with animoto. I'm hoping to be working with some enthusiastic young primary school teachers who will be using this in the classroom. For my part, I've only just started experimenting - maybe more later!

....not quite so good with video, though. Perhaps that's something to do with the size of the file, or maybe it's just the functionality. I like it as a quick way of presenting images. 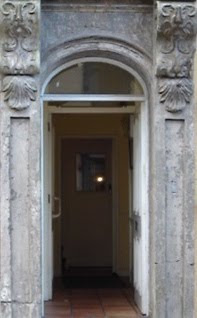 So it's new professorial doorplates for Andrew Burn (yay!!), Carey Jewitt (yay!!) and Gemma Moss (yay!!); and of course for Dr John Potter.....The humble doorplate turns that institutional space into your place. It labels and claims the space that it guards. After reading Latour on doors (ways through walls) and door-closers (as agents), I'm now seeing office spaces in a new light. But I'm also appreciating revisiting Nicholas Burbules' work on the virtual. It's a densely packed piece, but I like his ideas on transformation. 'Eventually, the sense of inhabitance, familiarity, and comfort people feel in virtual space and time - especially when these are experienced in conjunction with the simialr engagements of other people - achieve a further qualitative shift: from virtual spaces to virtual places.' (p.174). He goes on to develop the idea of place by referring to the idea of an 'objective location' . One that becomes personally and socially meaningful. Somewhere where one can belong (or not). Burbules is useful - but I don't think he really accounts for the importance of objects and texts, or for the fact that some spaces are other people's places. That there are hostile, bad or forbidden places, too
Posted by Guy Merchant at 1:39 PM No comments: 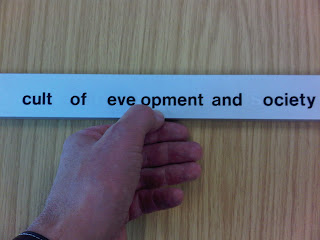 I seem to remember having to wait about four months for my Dr nameplate to arrive. It took about the same length of time to get the Prof one - not, you must understand that I'm particularly bothered about such titles, but when they're all you get for your labour I suppose they have some sort of significance. Anyway I moved office so now it looks like another four month wait until I get a name, let alone a title. As you can see above there's a particular kind of literacy practice involved - sticking plastic letters on to an aluminium strip. In the picture I'm reversing the process. Erasing some of the letters. 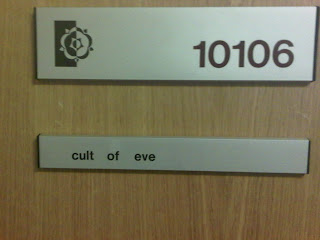 This subversive literacy practice has now left me with this sign. Now I'm guessing that corporate signage actually becomes so invisible that it will be hardly noticed - except that is by colleagues who are covert readers of my blog. All the same I'm not anticipating a queue of mixed reality tourists outside the office tomorrow or any other day!
Posted by Guy Merchant at 10:53 AM 2 comments: 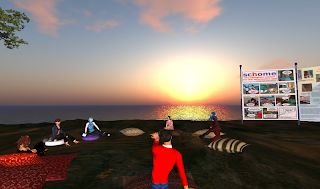 It was a really good idea to extend Monday's seminar into Second Life and I really enjoyed sitting on a cushion watching the sun go down! We mainly picked up on Sheila's work on information literacy and were interested to learn how keen librarians are on this kind of work. I suppose that maybe because they are more used to self-directed learning and helping people to find things out (as opposed to telling people, which is still the dominant discourse of teaching). Sheila took us on a bit of a tour and this really fleshed out what she was referring to on Monday.
Posted by Guy Merchant at 1:46 PM No comments: 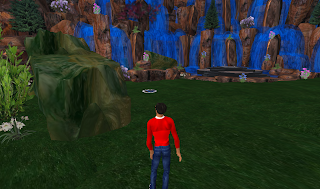 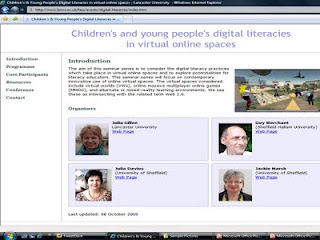 It's great to be at the beginning of a new semniar series - and on my birthday, too! Thank you ESRC , for the present. The series is called 'Children and young people's digital literacies in virtual online spaces'. Today Julia Gillen will be giving a history of the virtual, Jackie Marsh will explore the nature of virtuality and Sheila Webber will talk about her life in Second Life. And, just before Sheila, I get to talk with Michele Knobel via Skype. Wow! I've also set up hash tag for tweets and that's #virt09. You can check out the web-site here, which we hope to develop as the series progresses.
Posted by Guy Merchant at 12:22 AM No comments: 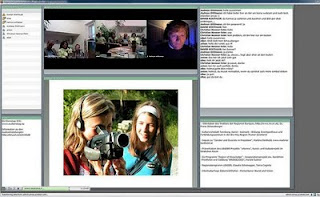 Meeting online holds great promise for those who need to collaborate but are geographically separate. Fast connection speeds now mean that it’s relatively easy to communicate synchronously, and there are whole host of different ways of doing this. One-to-one communication gets ever more sophisticated. Skype still leads the way in this respect. But when we scale-up and want any kind of sophisticated group communication (as opposed to presentation or formalised debate), things can get tricky. I’ve been working with various web-conferencing tools such as Elluminate and more recently Connect that provide a range of tools that could make educational interactions possible. Organising a fully-participative discussion is hard work. The problems are legion. There are problems of time lag, echo and sound balance (simply technical, but still important) and then there are problems of convention (signalling tentativeness, establishing turn-taking and conversational repair). I much prefer meeting in Second Life, it feels more like a real space in which you can see the room rather than imagine it, move and gesture in ways that just look daft on a webcam. But in many ways there are the same limitations. And I’m left wondering whether all this is because these media inevitably reduce communication or whether it is because we haven’t yet developed the basic conventions to make it work.
Posted by Guy Merchant at 12:59 PM No comments: 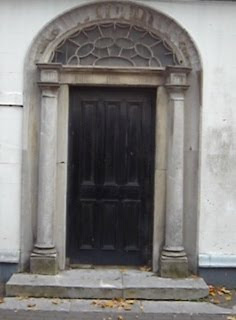 This is it! Just what I’ve been looking for, a mobile app that I can use to update on the go. ShoZu offers a seamless gateway to social media like Twitter, Flickr, Facebook and Blogger (as well as others). You can download a free trial or pay a small fee. This is the kind of convergence I’ve been waiting for since I upgraded my Blackberry. Speaking of which I really like the new feature that allows you to send a map of your location to someone else on messenger. Great for co-ordinating social meeting, when it works. Unfortunately it’s not very reliable and can often just send an ‘unable to retrieve data’ message. But as with ShoZu it’s the potential that is interesting!
Posted by Guy Merchant at 12:53 PM No comments: 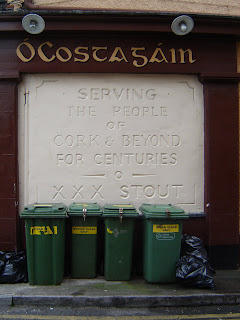 I'm just back from Cork and want to congratulate Dr Concannon-Gibney for a great thesis on implementing comprehension work in Irish schools. It's great to talk to researchers who are passionate about their ideas. Congratulations also to Dr Mugliett for her fascinating work in creating on an online community of teachers in Malta. Both pieces of work show how carefully designed educational research can really make a difference. As much as I'm suspicious of the whole notion of impact, work that engages practitioners is important to celebrate.
Posted by Guy Merchant at 12:55 PM No comments: