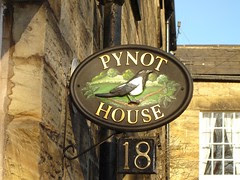 pynot house
Here’s the first of a series of pictures of the new home – a tease, if you like! I seem to be enjoying an intermittent broadband connection now which signals a return to the blog. So much has happened that didn’t get blogged – perhaps most notably the TV headlines on Wednesday that linked our declining performance in reading (from the PiRLS study) to computers. I’ve been trying to track the connection and it seems from this report that it’s down to one Ed Balls. But the BBC gave it all the weight of a moral panic, featuring interviews with well-spoken parents who were concerned about the evil influence of technology. So, of course, no-one reads on-screen do they? They just look at the pictures, wasting the valuable time that they could spend with books. Isn’t it about time that we abandoned this naïve view of literacy in favour of something a bit more realistic?
Posted by Guy Merchant at 11:54 AM