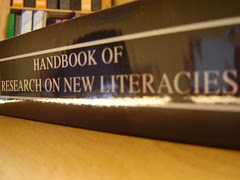 I borrowed the idea of nested social/communicative spaces from David Barton who talks about nested and chained literacy events. It seemed to me that the idea captured the sense of being simultaneously here and elsewhere, occupying two different interactive spaces at the same time. It strikes me that this is rather different from liminal activity in that the latter is often seen as a disorientating, indeterminate sort of space. Nested spaces are pretty much mainstream, and I suggest that although they are a good way of describing technological-mediated communication they also provide a reasonable account for more traditional forms of partial immersion (book-reading; movie-viewing and so on) where one isn’t exactly in the zone but accessing an alternative reality. Sarah points to Ito and Okabe’s study of Japanese Youth and mobile messaging (here) and the new technosocial spaces that are documented. Some of these seem to me to be examples of nested events. I’m not sure that they are necessarily new - just more pervasive and more persistent.