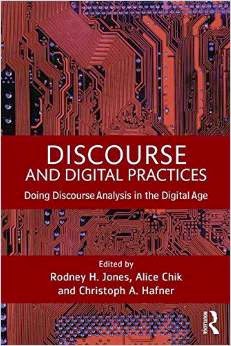 Discourse and Digital Practices - the outcome of a lively symposium in Hong Kong, organised by Rodney Jones and his colleagues, is out now in the UK. In my chapter, I took some of the iPad data (also published here), and tried to relate my analytical methods to the more familiar practices of discourse analysis. Whether or not I succeed in doing this is, of course, for readers to decide, but to me it felt a little like retracing my own footsteps. I was trying to think through how discursive practices, media narratives, digital technologies, adult-child relationships, notions of literacies... and so on, all mesh together in the story-sharing episodes captured on video. In doing this, I probably focused too intently on the micro-analysis, applying a rather simplistic multi-modal framework to make sense of the interactions between adults, children and iPads. So although this generated interesting thoughts about pointing and touching, it bypassed embodiment and feeling altogether. But more importantly it excluded the intervention of researchers, ignored the representational nature of video and foregrounded human interaction. I was drawn into a comfortable world - one in which we can watch and describe 'fluctuating modal hierarchies' (Norris, 2004) from outside. But recently, and particularly in my collaborative work with Cathy, that idea that there are distinct actions, interactions and even episodes 'out there', waiting to be described, labelled, and interpreted becomes rather problematic. It's not that I've come to embrace a rather extreme form of social constructivism in which everything dissolves into being a sort of collective hallucination (although it must be said that the time spent looking at virtual worlds often made me question the distinction between the virtual and the actual, and sometimes to the extent that there seemed very little difference), but more that the work on multiplicities, socio-materialism and post-humanism that we've been reading prompts some rather challenging thoughts about what we do as literacy researchers - well, let's say social science researchers in general - with our dominant structuralist accounts of meaning-making and our almost doctrinal acceptance of social constructivism.
Posted by Guy Merchant at 3:46 AM

You have done a very good thing by highlighting the outcome of a lively symposium in Hong Kong which had been organized by Rodney Jones and his colleagues. Research Paper Titles. Keep up with your good work. Congratulations.