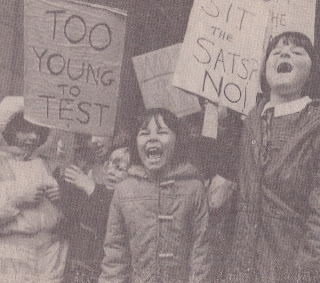 The cost of the latest initiative - to make all schools into academies - is likely to be £1.3 billion. That's a significant outlay on an unpopular intervention that will probably do little to improve education or raise attainment. It's the most recent ideologically-driven change that will be imposed on the school system. Parents and teachers are deeply suspicious of government motives and there is already indication of dissent. Threatened union action is set to disrupt this year's testing and marks an unhappy anniversary. It is nearly 25 years since central government first imposed its testing regime. Concerns voiced then by protesters continue. In May 1991 parents joined teachers in pointing out that workloads would increase and class time would be devoted to preparing for tests rather than teaching. It was the first time we'd thought about the backwash effect, but we're now so used to the way in which measurable pencil and paper tests warp the curriculum that we're very used to seeing classrooms full of children engaged in tedious, often meaningless routines to prepare for the annual testing ritual. In 1991 parents had a voice, there was dialogue with teachers and testing could be 'dis-applied' on the grounds that schools were obliged to provide an education 'in accordance with their parents wishes'. As a parent I exercised that right, and my daughter (centre frame) who was part of the first cohort to encounter SATs at each phase of her education, missed the lot without any detrimental effect. Parent governors were essential in negotiating parental and professional dissent and ensured that there was minimum disruption to educational provision. Good relationships were maintained throughout this campaign. I sincerely hope that this continues, but pause for thought, 25 years is a long time - we have witnessed a steady erosion of educational values and despite the hype, there is little evidence of genuine educational improvement.

It certainly is near extremely difficult to see well-informed readers on this matter, nevertheless you come across as like you comprehend those things you’re revealing! Bless You

Thank you for the read. Honestly you covered the http://awriter.org/advancedwriters-com-review
topic and broadly examined all areas. If i was to write this i would have done a few things differently myself but you have definitely inspired me to get into the world of blogging. Thanks heaps for the post i really appreciate it. Have a good day and keep blogging

Such a very advantageous article. Mba Dissertation Very exciting to read this article. I would like to thank you for the energies you had made for lettering this awesome entity.

good Mobdro for Laptop or computer Mobile computer on mobdro ios download really know what you happen to be buffering with great.