Another day, another dream 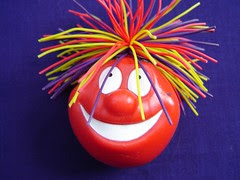 smile
I’ve been thinking about what avatars dream of…thought it sounded familiar and then found Mel Slater with a paper called ‘Do avatars dream of digital sheep?’ and Mel references back to Philp K. Dick ‘Do androids dream of electric sheep?’ All told it’s a sort of verbal meme. I also looked at the New Media Literacies website which gives an interesting list of ‘new’ skills. They have play, performance, navigation, resourcefulness, networking, negotiating, synthesis, sampling, collaboration, teamwork, judgement and discernment. I’m not sure they’re all skills and I reckon some of them could be usefully combined. Now these are described as ‘emerging skills’ – they follow ‘preliminary skills’ and that’s rather problematic, too. I’d want to eradicate the distinction altogether (see this post for similar comments).
Posted by Guy Merchant at 2:02 PM