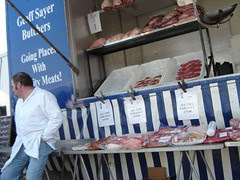 meats
Following this unhappy incident, there have been some calls for a blogosphere code of conduct. Tony Long is tough on this (civility, he argues, is about self-discipline, the absence of which is a more widespread malaise). On the other hand the Guardian’s Jonathan Freedland says ‘the risk that the blogo-sphere, which could be a new, revolutionary public space, instead becomes a stale, claustrophobic environment, appealing chiefly to a certain kind of aggressive, point-scoring male - and utterly off-putting to everyone else.’ Again we seem to be back on the topics of authority, control, and censorship - and all the other problems that come with unregulated publication.
Posted by Guy Merchant at 2:06 PM