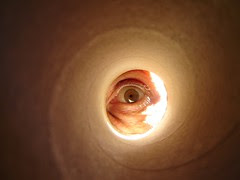 my eye
Here Tim O’Reilly reviews “Programming Collective Intelligence” by Toby Segaran, in which it’s argued that implicit participation is as important as explicit participation for Web 2.0. In other words what you click, where you go and your patterns of consumption (implicit participation) are every bit as important as what you produce. This makes it seem that Web 2.0 is driven by popularity as well as participation. Popularity or the demographic of choice rather than usefulness - or indeed any kind of definition of value imposed by experts, elites or hierarchies - is what really counts. According to O’Reilly: “No one would characterize Google as a "user generated content" company, yet they are clearly at the very heart of Web 2.0. That's why I prefer the phrase "harnessing collective intelligence" as the touchstone of the revolution. A link is user-generated content, but PageRank is a technique for extracting intelligence from that content. So is Flickr's "interestingness" algorithm, or Amazon's "people who bought this product also bought...", Last.Fm's algorithms for "similar artist radio", ebay's reputation system, and Google's AdSense.” Which is interesting because it shifts the balance from You learning about Web 2.0 to Web2.0 learning about You.
Posted by Guy Merchant at 1:57 PM