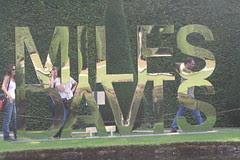 IMG_0635
It’s fascinating how we imagine space. I loved this Miles Davis photograph when I first saw it and was convinced it must be in a sculpture park in New York despite the unmistakable English background. Of course, it was only unmistakable when later I found out that it was at Chatsworth House in Derbyshire! (The new Duke's quite trendy.) Still good, but somehow different. Now we’re set to fly out to Cluj in Romania for an IDEC leadership conference. What’s Cluj like? Well, I have some vague stereotypical images in mind. ... the official site, Cluj cyber city is here, but actually this is more informative. Apparently it has a world famous equestrian statue! Anyway, I hope to be able to blog from there, but have no idea about what connectivity is like. But I promise there will be some pictures sooner or later!
Posted by Guy Merchant at 12:41 PM