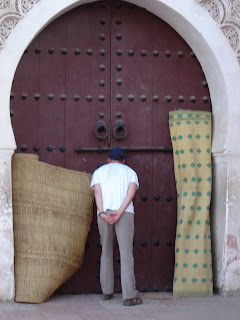 I've just been reading about active lurking - what a great concept! I must say it sits up there with Ron Carter's 'purposefully vague' and Jim Gee's 'pleasantly frustrating'. Active lurking can be used to describe that early stage when you just watch what's going down online - in a discussion, in social software or in a virtual world. You're watching and learning, rather like young children do, just before they join in. It reminds me of the idea of the silent period we used to refer to in second language acquisition. The idea being that you are actively learning the rules of the game, but not yet ready to participate. Of course, the frustrating part for the teacher or facilitator is working out whether the lurking is shirking - when that attentiveness has become passivity. Still, feel free to actively lurk in the blogosphere. I'll only know if you've moved on when you leave a comment!
Posted by Guy Merchant at 11:40 AM

This post has launched me into comment mode. Active lurking - what an interesting concept! I've recently been contemplating slacktivism - though maybe that's slightly more active.

Thanks for writing about this. I'd like to know where you've read about it.

I do like slacktivism, too! Active lurking comes from a thesis I've been reading, but I think the source is probably Lewis and Allen (2005)'Virtual Learniong Communities'. As always, with such things, though, it's what you make of the concept that counts. Thanks for your comment.