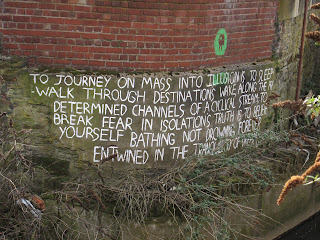 Flicking through duGay’s OU text 'Production of Culture/Cultures of Production' gives a great insight into fin de siècle media studies. I’m interested in the way in which the emphasis comes down heavily on cultural practices rather than texts, and this is particularly relevant with respect to yesterday’s ramblings. In fact there’s very little direct analysis of texts in the book. The closest thing is Gendron’s entertaining critique of Adorno which uses plenty of examples from doo-wop and rock ‘n’ roll to problematise ‘On popular music’. The pivotal point, for Gendron, is the construction of meaning (and identity) as he talks about ‘a constant struggle at the meeting point of production and consumption between the evocation of entrenched codes and the insinuation of alternative meanings.’ (in duGay, 2002: 117). Leaving aside for the moment the blurring of production and consumption in some new media environments, this pivotal point easily generalises to a whole range of encounters with texts.
Posted by Guy Merchant at 6:41 AM