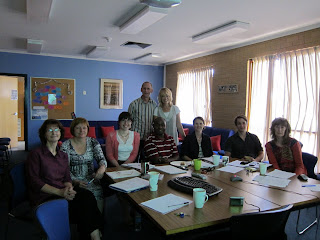 What might the study of literacies look like if it was set free from its histories of theory, its well-rehearsed models and research routines? That was the question we generated yesterday, with our talented colleagues at CSU - and, of course, that is a challenging tack to take. Moving away from familiar text-centric approaches became a key theme for me as we thought through how complex histories and diverse meanings are negotiated in social contexts. Not only do learners - and in a sense we are all learners - bring their own learning histories, social and cultural capital, and resources for meaning-making into new situations, but also these play out against the backdrop of powerful global and local flows that position them and carry the stories of how they became who they are in a social, cultural and historical sense. At the same time, the material resources for meaning-making play their part in constructing, communicating - mediating our relationships with others. Here, the available technologies, the modalities of representation and the codes (languages and scripts) can be seen as the tools or resources. This remains a sketchy outline of a detailed conversation - but it leaves me with a sense of how textual approaches might be displaced in order to allow us to develop a model of literacy that (re)places social interaction and meaning making at its centre. To be continued.
Posted by Guy Merchant at 2:34 PM