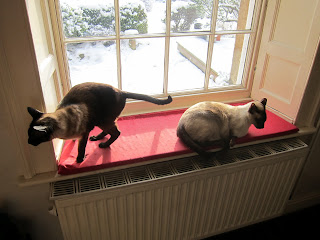 3 years ago my mother was taken ill, she was hospitalised, and never returned home again. She had 2 Siamese cats and I brought them up here to Chesterfield for safe-keeping. Within days the female cat did a runner, escaping through the bathroom quarterlight and all attempts to locate her failed. I never told my mother. And then just before Christmas, some three years on, I had a call from the RSPCA in Chesterfield - I was in Australia at the time - they'd found the cat! So now, after all this time, we're a 2 cat family again. Siri (we've no idea where she's been hiding out) is the one to the left. She's very shy and still getting used to us and the surroundings, but they say that Siamese are happier in pairs. I don't know whether that's related to the idea of Siamese twins or not.
Posted by Guy Merchant at 10:41 AM

Absolutely astonishing! What a pity the cat can't tell where she was all that time.

Yes, I've had all sorts of similar thoughts. Does she know that's she's returned... and more interestingly does she recognise her former housemate Tamino? And what would recognition be like for a cat? An instant match against a smell vocabulary?! The mind boggles!