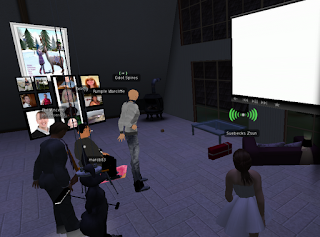 There were some pretty strange goings-on in Dasein (that's my place in SL) last Thursday night. The course participants had some very basic virtual orientation in the previous session, and then they had been given some Lindens and asked to work in pairs to furnish Dasein as a social space for us. So they brought furniture, decor and gadgets -some attached to their avatars and some in a more conventional (?) way. That must mean they all had some kind of collaborative shopping experience. I put up the big-screen TV and we watched a short film and then ended up listening to music and dancing for a while. We had rum and cocktails, but I wasn't aware of anyone actually drinking. I find it very interesting when we make the transition from the VC environment into SL and back again. Dasein certainly feels like a place and the 3D representation accentuates this. The interaction between avatars is definitely more social, and also quite a bit more random. Back in VC mode we're like talking heads, like TV, but still quite definitely mediated. It's very tempting to think that VC is more real; but then SL feels like a reality. It feels much more like going somewhere and meeting people. From a pedagogical point of view it seems, at the moment at least, as if we have some routines in the VC environment - routines that appear to be recognisable as learning and teaching. In SL, a bit like in a non-formal setting in real life, learning happens but it's completely interwoven with the experience of being there and doing stuff.
Posted by Guy Merchant at 11:27 AM