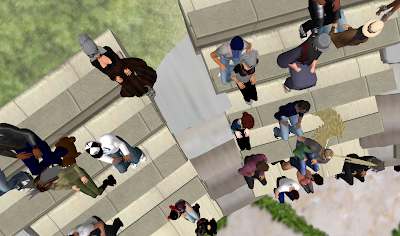 I like Thompson's idea of mediated publics. He argues that public was once defined in terms of people, places and events that share a common locale. Print media disturbed this convergence by creating a 'reading public which was not localised in space and time.' (Thompson, 1995:126). Other media have helped to accelerate fractured or reconfigured publics. In the UK, the 1952 Coronation is often cited as a landmark event, in which the spectating public was dispersed as television ownership grew exponentially. A public event was witnessed in private surroundings by many people, often with neighbours crowding into houses to share the spectacle. Perhaps it could be argued that the first moon landing was another key moment in that the immediate audience was particularly small, but the mediated event reached out to a large and very diverse public. Interestingly though, for the upcoming funeral of Thatcher, the public is divided in other ways, but there's bound to be a heavy media presence.
Posted by Guy Merchant at 7:40 AM