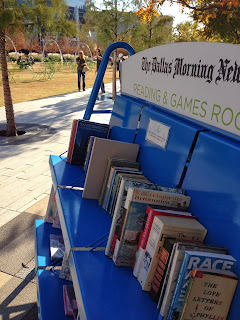 I found this year's LRA conference provided a rich fare. Some familiar things were being re-stated, some key work felt yet further developed and some radically new ideas seemed to be emerging. Cathy commented that the text itself received relatively little attention, and it does seem that with a growing interest in mobilties, and embodiment and affect, new constellations of sociotechnical and sociomaterial engagements are coming to the fore. Any signs of the text have now become ghostlike. Especially since now they have become open, provisional and often multi-authored, and in some senses ephemeral. Karen Wohlwend said something like 'I don't really like to talk about texts anymore, it seems that the kids are producing contexts.' I liked this, and although you could see in her work, and in that of many others, things that looked like texts - texts that formed and reformed - they were marginal things, like pencil shavings to the real sharpening of meaning that was occurring. The frozen fixed texts we used to pour over, the multimodal designs we read into them now seem to move backstage, as we watch gesture, movement and the claiming or enacting of meaning making spaces through mobility and countermobility. But what if the researcher's gaze is actually produced as much by data capture tools as it is by new representational practices and related theoretical advances? Does the availability of head-cams, spy-pens and flip cameras simply frame the segments of reality that we study in a different way? Perhaps though, we are learning more about the contexts that we always knew were there. Perhaps we have started to neglect text, or maybe it is slowly erasing itself as a fixed thing, a thing of privileged interest. When early emergent writing was a hot topic, we ran those paper-based artefacts under the photocopier and poured over the products while they were still warm. The contexts we tended to capture back then, if we had the time, the resource, and the inclination were more about talk, the stretches of verbal interaction that we caught on dictaphone tapes and then lovingly transcribed. As different then as new literacies might be, so are the possibilities for data collection. If we remain true to our reflexive project we are duty bound to think about what is newly acknowledged as well as what is omitted, erased or remains hidden, and how this influences the construction of knowledge. Did the play of power and the enactment of inequality, for example, just slip from our gaze or, if we are attentive, are those same forces simply seen in new ways and understood afresh?
Posted by Guy Merchant at 1:29 PM