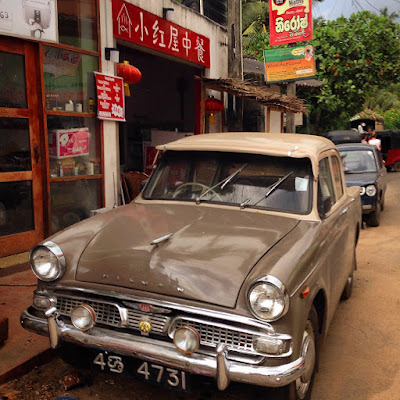 I'm back! Back from what friends fondly refer to as my gallivanting, which roughly translated means making the most of my time to explore new places, or places that interest me - alternatively rendered as going to warm and exotic locations just because I can.  This time Sri Lanka. And from my humble iPhone snaps this Hillman was the best, parked up on a sidestreet it strongly resonated with my 1950s boyhood whilst also being totemic of the whole colonial legacy. Corny as hell, I know, but cars seemed so important to me back then.  That beige two-tone was the colour of my childhood and the taste of milky tea all wrapped up in one. Sri Lanka, or Ceylon as we then called it, was something we did in geography as a prelude to getting on with life. So much for innocence. In Sri Lanka the communication system, both road and rail, put in place by the British, constituted an elaborate net to capture the country, to suppress resistance and to strip the hillsides first for coffee and later, when that failed, for tea. The road system is still there, you can see some well-preserved classic cars and tea is still big business. But amongst all that are centuries of culture, a whole history of art and architecture as well as an exquisite and diverse natural habitat. Returning to work might seem dull in comparison if it weren't for the enthusiasm of colleagues, the promise of new projects and the slow closing stages of previous work, all of which may well get reported on here in due course. As a corrective, before I stop for a cup of tea, I do want to make it clear though that I am not remotely interested in classic cars but it's just that I learnt at quite an early age that my father earnestly believed that owning a Hillman would make him happy, that it would be a step up in the world. That was abandoned when he splashed out on an MG in cream and British racing green...and just as I know Sri Lanka as Ceylon, these sorts of things remain with you.
Posted by Guy Merchant at 3:29 AM

good easily like currently Mobdro Application. delight in streaming mobdro app Below we will be utilizing Bluestacks emulator to mount best.