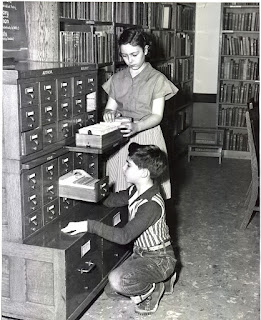 The public library was an important landmark in my childhood. It was in safe cycling distance, it was always warm, and it was the context for a ritualized, and mildly intimidating, interface with the adult world. I can clearly recall the heart-thumping point at which I would offer up my chosen books to be date stamped. I was in awe of the librarians who to my childish mind held the power to refuse me, point out my errors or even fine me. Invariably they were friendly, but they represented a powerful bureaucracy, an arm of local administration, that was strong and ought to be taken seriously. A successful visit to the library was rewarded by a subsequent rush of excitement - checking out was an experience like the end of a school day, clearing passport control or leaving a shop with just the toy you had in mind. But the pinch point at the library desk held all the power. It was the power that charged the anticipation as well as the release. The point where everything seemed to hang in the balance. With repeated visits and growing confidence I gradually became more and more interested in what happened at that point. The way in which a book's identifier - the book card, was deftly removed from a paper pouch glued to the endpapers, date stamped and then slipped with ease into my personal library card, snuggly held in alphabetical order in the custom-built wooden card index. As time went by I learnt more and more about the library system. Ways of classifying books, using card indexes and even requesting books that weren't in my particular branch. Home from my travels, in 1972, I was delighted to find that my mum had put in a request form for Herman Hesse's Magister Ludi - The Glass Bead Game. A postcard arrived at our home address on the 5th August that year with a hand franked two and half pence stamp. I know all this because the form dropped out of a book the other day. Evidently I used it as a bookmark and then forgot all about it. But the card is a fascinating record of a set of social and material literacy practices that were very much alive at the time, in libraries - and elsewhere too. The card - a reservation slip, a standard 6 x 3 inch postcard, serrated on one of its narrower edges at the point where it was detached from the counterfoil. One side with four pre-printed and indented rows of dots (for the address), the other with clearly labelled positions for the book's details - author, title, publisher and so on. The local branch name is ink-stamped on (oh, those ink stamps, so often the seals of officialdom!). All the specific details are captured in the distinctive flourish of my mother's handwriting. And one other feature that deserves a mention: two small holes and an impressed line in one corner, the scars of an earlier stapling, which tell something about a prior process of attachment. Such an efficient system, a marker of a sophisticated analogue literacy practice in its heyday, at a time when public libraries were generously funded. I could go on, but as I nostalgically turn this yellow-edged card in my hands I realise it's also charged with all those memories - returning home, my mother, reading Hesse, the smell of the public library, date stamps, stationery. It is slowly becoming other, its original and specific meaning is tucked into a card pocket in a much larger multidimensional catalogue.
Posted by Guy Merchant at 3:29 AM