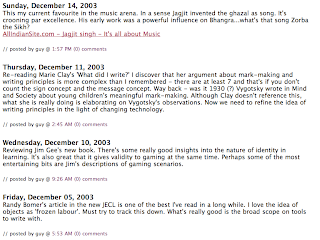 I missed my blog’s anniversary. It’s not that I’m sentimental or anything, but I’ve been writing here for 7 years and that seems quite a long time for a blog that deals with new media. In a week in which the news has been dominated by the Wikileaks affair, in which Twitter was reported as being worth $3.7BN, and in which Facebook founder Mark Zuckerberg was named Time magazine’s person of the year it seems that small niche interests have quickly become important features of the social, cultural and political landscape. Wikileaks was founded 4 years ago, Twitter 4 years ago and Facebook 6 years ago. So what’s new? Maybe it’s the level of over-exaggeration and misunderstanding. Time commended Zuckerberg on connecting the world. ‘In less than 7 years’ they said he has ‘wired together a twelfth of humanity into a single network, thereby creating a social entity almost twice as large as the US.’ Facebook’s success should not be under-played, but to claim that it has created a ‘single network’ or, for that matter, ‘a social entity’ is simply wrong. Perhaps underneath it all is the simple fact that old media types, in their attempt to understand what’s going on and play it to their advantage, have fallen under the spell of new media. 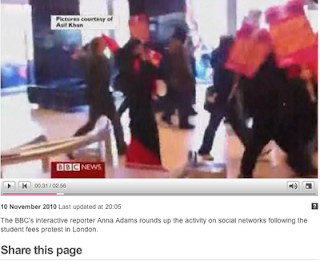 Ever since Howard Rheingold wrote about smart mobs we have been aware of the potential of social media to mobilise people in acts of resistance. In the UK the history of flashmobs has been limited to leisure spectacles such as iPod parties and the occasional activities of technology-enabled eco-protest. Things have changed with the latest round of mass student disturbances. Opinion is divided on the impact of SNSs in mobilising activists, but as this enthusiastic reportage from the BBC illustrates, old media are clearly excited by the possibilities of harvesting citizen journalism to present breaking news.

I liberated this fabulous image from the great information silo of the university's VLE. I thought that was quite appropriate since nothing else seems to be able to get in or out on account of severe weather. Snow to be precise. Last week saw large-scale disruption to the transport network. Most academics were virtually working at home and managed desktops were groaning under the strain. I eased that particular burden by reading Gillian Tett on data silos, and in so doing confronted the irony of living in a highly connected world which is at the same time deeply segmented (I mean what exactly do I know about banking?). So while I'm chewing over some theoretical issues about networking, and online social networking in particular, I started to wonder just how much a space like Facebook has its users locked-in, generating a rather large data silo which can be partially explored from within but not from outside. It's networking, Jim but not as we know it!