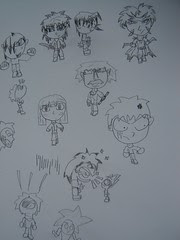 Learning that at least three Japanese universities are now offering courses in manga studies, I just had to blog 10 year old Oscar's Manga syle sketches. In Japan, it seems that academic interest in manga grows, whilst the home manga and comic market is in decline. That seems to be a familiar picture in popular culture and the study of popular culture.

There are some interesting manga blogs around. I've been looking at the wonderfully titled Cognitive Dissonance which offers comic-book reviews including manga stuff and Precocious Curmudgeon which has a similar pitch.

Fascinating post .
On a personal note I have never liked comics and that includes Manga. Asa kid I used to try and like them but didn't really. I think they are not pretty enough for me and I hate the temporary kind of feel to them. I like books better, the weight, the look, etc.
I bought a few Manga books and watched a few cartoons but find them very annoying. I feel a bit ashamed as I am pre popular culture, but this is not a genre I like.

Funny that - I just didn't get the whole idea of comics as a kid, either. However, as a student I got a lot of pleasure from the so-called underground comic strips of counter-culture.
I'm not a big consumer of that stuff, but I'm fascinated by kids interactions with Manga. There's also some really sophisticated work - usually going under the heading of graphic novels.
Maybe we've all got popular culture blindspots. I mean look at football.