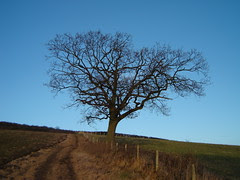 winter tree
One laptop per child began as a charity idea to empower children in developing countries by providing them with powerful tools for transformation. One Laptop is a non-profit organisation led by Nicholas Negroponte, designed to create extremely low-cost laptop computers that can be powered without electricity and run free, open-source software. Here’s more on that subject. Last week I commented on the domestic plan to give every child internet access. This piece reports on schools minister Jim Knight being in talks with Microsoft, BT, Sky, Virgin and RM to sponsor his vision, the computers for pupils initiative (you can see the launch speech, here). There have been some misleading news reports:this isn’t a laptop for every child (domestic or otherwise). In fact, and I quote, eligibility has been based on a formula to determine some of the most disadvantaged Key Stage 3 and 4 children throughout the country. The project has now been taken over by Becta and could well help to bridge the digital divide. But I guess the devil’s in the detail. Just throwing resources at a problem doesn’t make it disappear. Imagine, though, the impact on literacy if every child in every class had wireless access: that would transform our schools, and our ideas of learning and teaching in a single stroke.
Posted by Guy Merchant at 12:06 PM

If you type 'david mellor + face + wood grain + kitchen' into google, the top hit is 'MY Vedana'

Hah! Fabulous - hope it made you laugh!