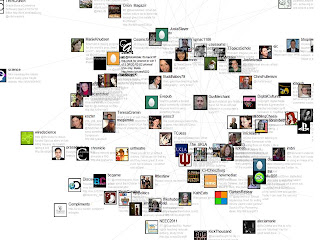 I've just started writing a piece on social networking. The provisional title is 'Unravelling the social network' and I reserve the right to use that! Having a title I like helps me get started even if I drop it later on. Visualizing social networks needs to have some sort of focus so I had a look around at what's out there. There are reasonable free tools for visualizing web sites (not quite the same thing) and some work on Flickr. But the Neuroproductions Twitter Friends visualizer wins the day for me. I'll probably use it as an illustration. I suppose all it does really is to feed off your Twitter stream and the Twitter streams of your friends, and the downside is that it doesn't show linkages. But it's playful and attractive and works well and hey that's me right in the middle!
Posted by Guy Merchant at 11:08 AM