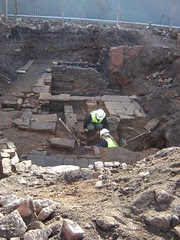 There’s an interesting segment on the south side of the city just beyond the cultural industries quarter, and it’s layered in history. Here there’s old warehouses converted for city living, art studios, a martial arts centre, sandwich shops, old pubs and so on – all alongside small businesses, the surviving leftovers of the Sheffield steel industry. You’ll also find two of the city’s biggest clubs here: Republic (home of Gatecrasher) and the infamous Niche all-nighter. Squeezed in between this and the American-style Decathalon cut-price sportswear outlet is a small pocket of land - the site of the Sylvester Wheel.

Arcus dig the city, often focusing on industrial archaeology. In the photograph you can see old querns (millstones) and those good folks from Arcus labouring away. They’re uncovering a workshop and grinding troughs which date back to 1650 (if not before). Powered by the Porter Brook, it was still going in the early nineteenth century and was used in the production of table knives and the like. Round about 1850 they went over to steam power. There’s a planning application on the land now, so something new will eventually be layered in.

V cool picture if I may say.

Thank you, my dear!