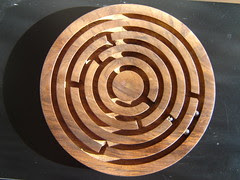 There seems to be a lot around at the moment about folk music (for example, here). I asked a friend who's knowledgable in such matters if he thought there was a folk revival- he said there's been one going on since the 1950s! I just didn't know what to make of that.

But at the weekend, I read about how Ewan McColl was under surveillance as a communist (and banned by the BBC, too), and that made me think that the best times for folk music are when it becomes a vehicle for resistance. Bring on Dick Gaughan at the Miners' Strike for example.

Yesterday, on Night Waves, there was an interview with folk-protest-veteran Joan Baez, who's currently touring the UK. She was asked who she thought had taken on the mantle of Woody Guthrie in contemporary America. Without a pause for thought she said Michael Moore - different build, same stance, different medium.