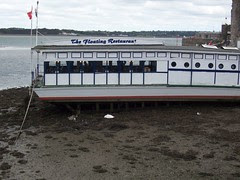 Restaurant
My colleague Will Reader has been getting a lot of attention for his work on social networking sites. The headline - that sites like Facebook don’t deepen friendships – isn’t particularly startling. What is more interesting is the way in which online social networking has gained popularity – that and its role in thickening existing social ties (Barry Wellman has been saying this for a while). Thickening, in the sense that I use it, doesn’t equate with ‘depth’ but merely points to the fact that social networking is additive, bridging online and offline worlds. (Thanks to Ed for the photograph).
Posted by Guy Merchant at 11:39 AM