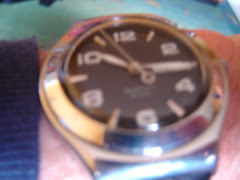 blurrings
In a tantalizingly brief post, Torill Mortensen comments that in the late modern world, time and space are the only real values. I wished there had been more. I was reminded of Meyrowitz’s No Sense of Place (1985) in which he argues that with new media: what is happening almost anywhere can be happening wherever we are (p.125). Recently Meyrowitz has turned his attention to the blurrings of time and space that come with mobile technologies. In this essay (pdf) he describes how: electronic information seeps through walls and leaps across vast distances. While we still often think of electronic media as simply connecting one place to another more quickly, our forms of communication have been subtly but significantly altering the environments we live in, transforming them into social places in which we are becoming new people. (p.97) This comes from the essay Global Nomads in this book. This reminds us of Ito and Okabe’s technosocial spaces. But Meyrowitz makes some other useful observations, too. For instance literacy he suggests: encourages the splintering of identities based on levels of reading ability and sets and subsets of literatures (p.93). And later he approaches that idea of linear development from a different perspective: the old, year-by-year, staggered access to information, where children of each age and reading level were exposed to entirely different sets of information, is largely bypassed (p.95). What a massive challenge for models of education!
Posted by Guy Merchant at 2:37 AM