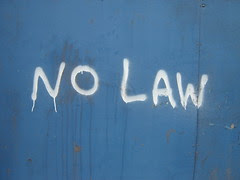 Anarchy in the UK
The ephemeral texts produced in that nexus of popular culture, new technology and literacy are of enduring interest. Web 2.0 voices tend to be un-edited and un-censored, and as a result the texts that are produced are often, in one way or another, contentious. Looking at a YouTube video that has attracted a massive number of views, and an impressive list of comments, I was struck by the passions ignited by a low-grade mash-up of a football pitch incident. The un-regulated stream of comment was perhaps predictable. A public display of taunting, trading insults, and of taking sides - and much of the writing peppered with expletives and derogatory references . Much of it is in the demotic of grafitti - not the chic high-end street art stuff - I mean the raw edged stuff, crude and rude as it is, the material we choose not to photograph and put up on Flickr. I must say I don't find it offensive, but I was troubled, but perhaps not surprised, by the shades of racism and sexism that run through the banter. That made me wonder how we stand as educators in relation to this. I realised that I couldn't subscribe to a total Web 2.0 is wonderful view any more than I could to a ban this rubbish stance. I'm convinced that we need to engage with it, we can't turn our backs on it, pretending it isn't there, or naively accept that everything in the world of popular technoculture has a rosey glow. It's just as it is - a galaxy of practices - but we need to find ways of engaging with it, critiquing it, and harnessing the tools. It's out there, laid bare!
Posted by Guy Merchant at 11:56 AM

This i such a timely and useful point to be making about Web 2.0 stuff, Guy. Colin and I attended ROFLcon at MIT, Boston, the other week. The conference was devoted to internet memes and was utterly fantastic ona range of levels. but what really struck us--and was only addressed in th opening keynote--was th ay in which these memes were more or less approached and discussed "amorally". I'm groping for words here, bu the ethos was very much in celebratory vein with little regard for "effects". Dave Weinberger--in his fantastic opening keynote-- underscored some of the very real social issues attending memes when he described the star Wars Kid" meme as "not our finest moment". But this really was the only explicit mention of such things--indeed, many panelists refused to engaged with the effects of their websites etc., saying it was up to participants to set the tone etc. (this especially applied to the cases of 4chan and Fark.com). We talked lot about this and realised how important it is to really explicitly recognise and name the not-so-pleasant stuff, as well as the fun stuff, in our classrooms.

Thanks for your comment - I spose many of us have been carried away by the possibilities of Web 2.0, but we certainly need to take account of the significance of unregulated content. All the more reason to have a carefully thought through educational approach. The fact that some rather dodgy stuff is out there is just how it is - maybe more public - but there it is. It's how we teach kids to work with that stuff. A bit like swearing - we all know it goes on etc etc, but we have boundaries in certain contexts and we have a political and an ethical standpoint.