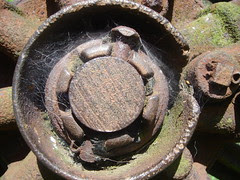 hub
I enjoyed watching the Philip Roth interview last night. He delivered a blistering attack on George Bush. It seemed to me that “disillusionment with the Bush administration” (here) is a bit of an understatement. Mark Lawson’s rather a downbeat interviewer but that seemed just right for Roth, who helped him out. The only trouble with Roth is that he doesn't really offer any hope. We're left feeling that there's no alternative; no voice of critique apart from his own.

I’m interested in our growing obsession with erasing the past and particularly with shredding documents. Burning stuff strikes me as the best solution, but if you really want to turn destruction into labour there’s these wonderful Shredding Scissors – so good, they’re featured on both BoingBoing and ShinyShiny!

Love the scissors.. I have a running battle as our data protection people would love to shred lots of our college archive- goes right back to 1862 and includes a journal from one of the early principals using Greek to slag off particular students- whereas to me that feels like living history we shoud keep going. Okay, maybe without the Greek ..
I wonder if we could use that thing you use to make briquettes out of old newspapers to recycle committee papers and the like into fuel? is that green or still damaging because we then burn it?

Yes, I sometimes wonder if we are erasing traces of our lives. It could be the same with photographs, too - we save them online (unrelaible), on hard drives and CDs . They appear to be more durable but are they?

and who wil be able to access our online photos when we are gone and our passwords with us? it is immeasurably sad seeing old family photos in junkshops but even sadder to think of them being wiped with our hard drive?