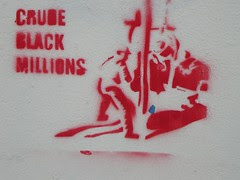 crude black millions
I captured the Crude Black Millions stencil on my way to the Critical Literacies Project meeting at the University of Sheffield (I’m a critical friend to the project – here’s the blog). I like photographing wall art and have snapped up a few stencils in the past couple of weeks, but often – like this one – they’re meaning is ambiguous. At first it seemed to me like a rather oblique commentary on war over oil and American imperialism, but I wasn’t sure whether I was imposing this reading. Crude Black Millions is somewhat condensed, so I wondered what would happen if I googled it. That’s how I came to this picture on Olivia Leigh’s photostream. If you scroll down the comments you’ll read this: “Hello I like your pictures. . . I did the Crude Black Millions stencil, and was chuffed when someone told me there was a picture on the interweb. Doing some stuff with pictures of wind turbines at the moment, coming to a wall in Sheffo near you soon. . . come see my band play Crude Black Millions the song soon! We’re called Corleone.” Well that seems rather weak viral marketing, particularly since none of Olivia’s tags make obvious reference to Crude Black Millions. But then, searching Flickr tags for Crude Black Millions I found this and then this from Evissa, and felt in good company with local stencil collectors. Funny though, what about Corleone and do I care?....well, just enough to find the Sheffield band’s website (and stuff on myspace) , listen to the track Crude Black Millions and find little trace of anti-war agit-prop. Now I don’t intend to set off on a similar trail for their other song, titled BMS (Manhattan: Fuck) for obvious reasons.
Posted by Guy Merchant at 8:21 AM