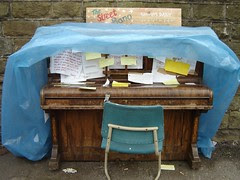 Sharrow Street Piano
I’ve nearly finished Gathering Light - and in reading it I slowly realized that I’ve read the same sort of thing so many times before. But I also realized that I’m never tired of the tale of dirt-poor migrant families (usually in Canada or maybe the US) with talented children who fight against the odds to get an education. I can’t say that the narrative pattern matches my life – it just doesn’t. Maybe it’s just that I identify with aspiration in the face of hardship or victory over inequity – who know – but I’ll recommend the book anyway!

I got an email from Monica Whitty the other day and I’ve been checking out her research, which comes from a completely different tradition from mine, but is nevertheless worth looking at. Her study of online activity, loneliness and self-efficacy explodes some popular myths and raises some interesting issues that relate to changing social networks and new media.

And in the picture, there’s The Sharrow Street Piano (open 9.00 am – 9.00pm), just as it says - out there on the street for “the people”. No, seriously, what a great idea this is. And then there’s paper and post-its for people to react to the street piano. You can see some of the comments here and here. It’s creative, it’s art, it’s music, it’s fun and it’s even starting to become literacy. The people of the street piano must be careful, soon they’ll be eligible for a government grant!!

Yes, it's still there! No I didn't tickle the ivories, I was too busy taking photos!!

I read that book a wee while ago - and enjoyed it I think! Am reading a tremendous tale of an old ex pat with a secret at the mo.... Old Filth. Highly recommended

Sounds great, Clare, I'll look out for that.