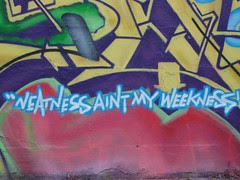 neatness
I’ve been watching Jackie’s catalogue of virtual worlds for young children as it grows and grows. It’s interesting - and somewhat worrying – that these worlds just reproduce (and sometimes amplify) features of the actual world. I suppose we shouldn’t be surprised. After all the same mindsets, the same commercial and educational interests are at play. We may “end up regarding the virtual world as a place no more special than the real world.” according to Richard Bartles. Richard (who was a MUD pioneer) was interviewed by the Guardian in the summer. It’s a bit of a downbeat message for someone who’s quite excited by what virtual worlds could do, but he suggests that: “So many people will encounter virtual worlds early (when they are children) and so many compromises will have to be made to attract a mainstream audience that I can easily see virtual worlds losing much of their soul, so that in 20 years from now people will wonder what it was about these things that people ever found so compelling.” Read the rest here.
Posted by Guy Merchant at 11:49 AM