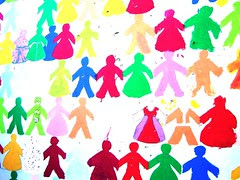 bright kids
There’s now quite compelling evidence to suggest that British mobile phone owners just love to text. Even though mobile phone ownership isn’t particularly high (as compared for instance to Spain) this is the place for SMS. So why are we so into our mobile phones – why is it such a British thing to text? A new survey makes some interesting observations about presence and connectivity, but still doesn’t come up with clear answers. Meanwhile this article from the US argues that ‘the proliferation of writing, in all its harried, hasty forms, has actually created a generation more adept with the written word’ and goes on to suggest that texting may help to boost standards in literacy. At last, the voice of reason – texting is writing and writing is literacy! But back to the safety of statistics - many Koreans own 4 (or more) phones and owning up to 14 isn’t unknown. Knowing which one to ring or pick up could be quite a problem.
Posted by Guy Merchant at 12:47 PM