Where I'm coming from 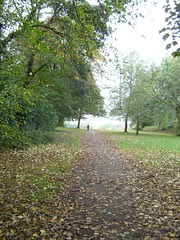 Autumn walk
Social networking sites provide rich examples of what Giddens describes as the ‘trajectory of the self’. My daughter, Emma describes how Friends Re-United never did anything for her, and MySpace was ‘too young’ whilst Facebook, not only thickens her existing social ties but also networks her with old acquaitances – friends who have moved abroad, people she knew at school and so on. This, she explains, 're-defines who you are' and ‘how far you’ve come’. As Giddens says: ‘The trajectory of the self has a coherence that derives from an awareness of the various phases of the lifespan. (1991:75). Interestingly, Mark Zuckerberg, the founder of Facebook (interviewed here) says: ‘We're talking about the set of connections that everyone has in real life. All we're trying to do is take those connections and map it out. Once we have an accurate model, we can help people to share their information more effectively. But it's going to take 30 years – or at least tens of years – before this becomes a really mature platform.’ You can view this project as an attempt to establish personalization through commodified experience resolving one of Giddens’ dilemmas of the self. An ambitious project (...and I’m not on Facebook, yet).
Posted by Guy Merchant at 12:22 PM

It's about time you were on facebook, its the best thing EVER for keeping up with everybody, something I am pretty terrible at... or was, til facebook!

Hello Anya!!! You seem to petitioning everyone to get on facebook these days. I may sound faint-hearted, but I just don't think I've got the time. Anyway it's great to hear from you on this oldy-worldy bloggy thing.